While the rest of my site is getting a makeover, I've decided to keep up my most popular page, my Silicone Leeloo Suspenders tutorial! As I am doing a batch of suspenders for Halloween this year, I will be redoing the images and explaining things better, so check back in October for an updated tutorial. 9 years?!? Really? These images are so small now! :p

TWO trial-sized (2 lb) packs Smooth-On Dragonskin
opaque orange Smooth-On SO-Strong dye - NOTE: I know it says not to use with silicone, but this is what I use and I have never had a curing problem. If you want to use the correct dye, search for silicone pigments.
2 large sheets 1.5" thick pink insulation foam - mine is from Owens Corning, available at hardware stores
1" diameter pvc pipe
utility knife and scissors
sandpaper in various grits
glue - Elmers or wood glue; use hot glue gun with extra caution

I drafted a pattern you can download: leeloosuspenders.pdf. THIS IS FOR PERSONAL USE ONLY AND NOT FOR COMMERCIAL USE.

I ended up cutting off an inch on all raw edges before connecting them, and it's a little loose on me at 5'2". Cut off more if you are shorter, or add additional seam allowances at sides and shoulder/crotch. If you add additional seam allowances, it can be cut off later, so you can add 1-2 inches. Dragon Skin is VERY stretchy - my suspenders will fit XS-L without any alterations. 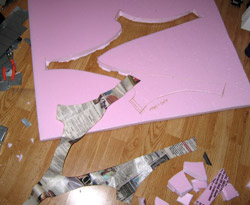 Step 1: Making the pattern and cutting it out

(Apologies for microscopic pic. Shiny new pics coming soon!) I drafted the pattern by drawing on a bodysuit that I bought from the thrift store. It was very hideous and 80's, snapped at the crotch, and had an unsightly lilac and blue victorian flower print all over it. Because of it's ugliness it merely cost me $1. Not bad for a "pattern". (Author's update: It has been a decade since I wrote this tutorial - now that bodysuit would be in style and sold at Forever21. For like $10.) I then put it on and drew where the suspenders should be. I cut it out, ripped the sides at the seams, and carefully traced it onto newspaper. Then, making sure the pattern was symmetrical, I cut it out. Viola, there was my pattern!

To make the mold I used pink insulation foam. Not as durable as wood and plexiglass, but since I lacked the equipment to cut wood and wasn't making multiple copies, (at least not then...*COUGH*) I opted for this quick and easy route. I cut it out carefully using a utility knife, and sanded any jagged edges by hand. 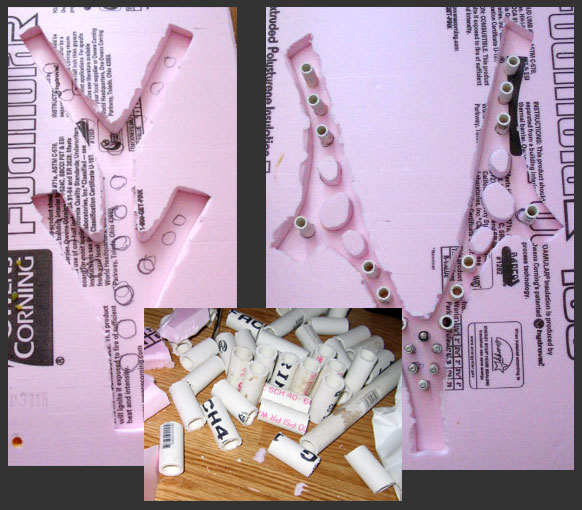 Step 2: Adding the holes and preparing the mold

I glued the foam reliefs onto another piece of foam using elmers glue, making sure to concentrate on the edges of the pattern so the silicone wouldn't bleed under the gaps while curing. For the 'holes', I cut about 40 pieces of 1" PVC pipe and glued them upright like in the picture. I used a gluegun on low temp for this, because time was short and I didn't have time to use Elmers. I was careful not to melt the foam. DO NOT use a hot temp glue gun on pink insulation foam; it melts the foam! Try it for yourself. It's kind of cool. Don't inhale, though.

For the oval shapes, I carved pink insulation foam and sanded them smooth. Wear a mask when sanding insulation foam because the sandies are not good for your precious lungs. A little more glue gun on low, and there was my super ghetto, one- to two-time use mold.

Step 3: Mixing and pouring the mold

Next semi-scary part: mixing and pouring the silicone. Since silicone does not heat up while curing (like fiberglass does), it is safe to use insulation foam as a mold. If this was fiberglass, your mold would melt like icecream in the sun. Following Smooth-On's directions, I mixed the dye into the silicone n' stuff. My assistant Brian helped pour it into the mold in sections, tilting it to make sure it layed evenly.

I used one of Smooth-On's trial-sized kit per side, which yielded a thickness of about 1/3" to 1/2" when cured. We blew and popped out many bubbles because the dye made the product very thick. If I had planned ahead and done a test strip like an intelligent person, I would have bought some mineral spirits to mix into the silicone to dilute it a little and make it more 'runny' so the surface would have been smoother. But this was kind of a haphazard run-through, so what can I say. I learned for next time. 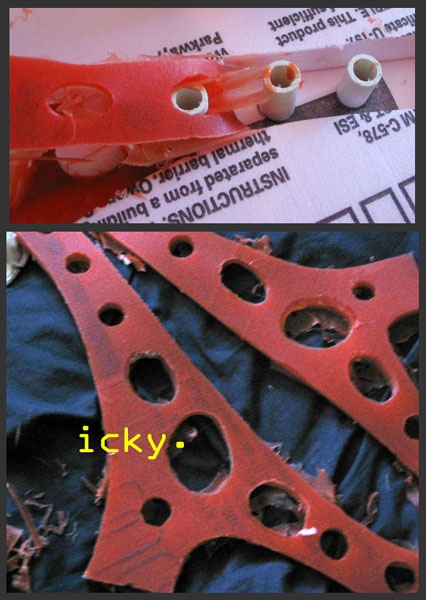 After 4 hours drying time, I could peel the suspenders out of the mold. Yay! The surface of the mold that was against the foam (i.e. the "bottom" when curing) became the outer side of my suspenders because it was the smoothest. Well, that sucked, as you can see from the pictures - the lettering on the foam came off with it. I HAD to use the side with the writing, because the ideal unlettered side had gotten marred from sitting in a corner for months, getting beat up. So I chose lettering over a bumpy surface. I removed the ink with lighter fluid. Lesson learned: use plexiglass as a base, or don't scuff up the plain pink side of the insulation foam. 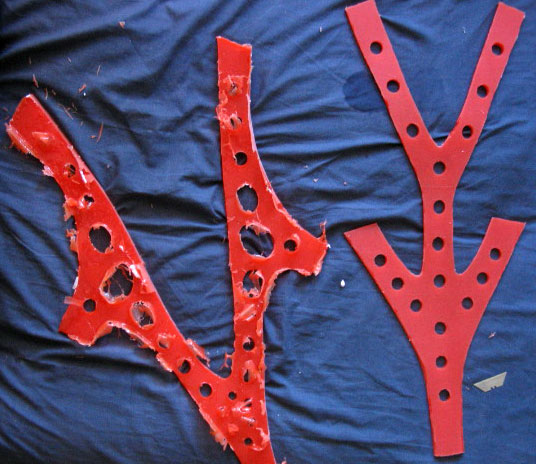 Next I had the laborious task of snipping off all the grossies, I guess technically called "flash". All you mold buffs are hitting your heads on your keyboards now, rolling your eyes at my un-knowledge of correct terminology. WHERE WERE YOU WHEN I NEEDED YOU. (And secondly, why are you reading this?) I had to learn the hard way - from the internets, where the truth is at best a half lie.

Step 6: Attatching the front and back

Now came the scariest part. gluing the pieces together! This could make or break my suspenders, literally. Nothing would be so mortifying as having my suspenders snap mid-picture-taking, leading to a paparazzi-esque flashbulb blinding record of how "fat" I was that I broke my suspenders. Or something. In my greatest nightmares.

I did a semi-final fitting, and the weight of the pieces made it hang loosely. I cut off an inch on all sides, and then snipped the edges at 45 degree angles to make large surface area joints. Since I didn't take a picture of this, enjoy my crudely executed drawing. I mixed up a small amount of silicone and dye for the paste. It's self adhering. I smeared it on thickly, weighted the joints between some plastic-covered books, and waited another few hours for it to dry. 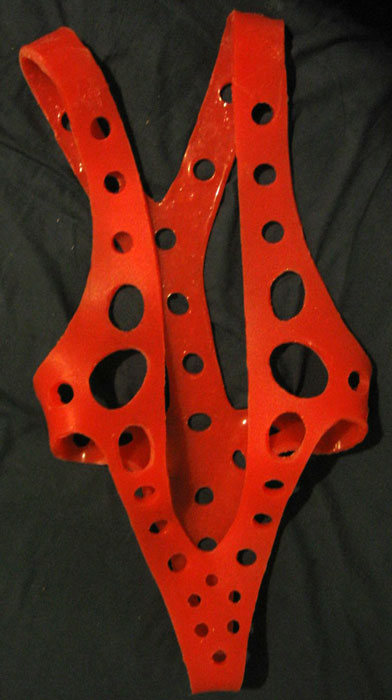 After drying, I removed excess ickies from the joints. I put it on and did a little jig. The joints hold very securely. Go back and cut extra holes in the shoulders for accuracy, or leave as is for extra strength. I know the second-time round will be less sloppy, but for my first foray into casting, I think things were quite a success!

A note about storage: Don't keep these out in the open to collect dust; it's a pain to remove. Let your suspenders cure for a full 24 hours before putting them in a plastic bag, where they should always be if you're not wearing them.